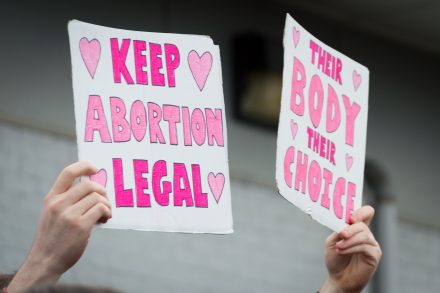 In the time warp that was last week’s election, you may have missed the mixed bag of state ballot initiatives threatening abortion access. In two key states, Colorado and Louisiana, very different in many regards, voters came up against efforts to pass abortion bans in their states. Coloradans showed up and defeated an abortion ban, while voters in Louisiana, unfortunately, approved a deliberately misleading constitutional amendment intended to ban abortion.
For over 45 years, the United States Supreme Court has made clear that the U.S. Constitution protects an individual’s right to decide whether to have an abortion. Yet, anti-abortion lawmakers and advocates across the country continue to try to upend that decision and make abortion illegal.
Here’s how Proposition 115 in Colorado and Amendment 1 in Louisiana are a continuation of a long line of harmful, politically motivated, and medically unnecessary attacks on abortion in these states and nationwide.

Prop 115 would have banned abortion after 22 weeks gestation, with no exceptions for health or individual circumstances. The proposal was intentionally confusing and a threat to people who become pregnant as a result of rape, people whose health is endangered by carrying a pregnancy to term, and pregnant people with a lethal fetal diagnosis. Bans on abortion like Prop 115 particularly target Black, Latinx, and Indigenous people; LGBTQ+ people; people with low-income; and folks who live rurally.
A coalition lead by Abortion Access for All, among others, successfully defended Coloradans’ access to abortion care yet again. This was the fourth time in twelve years Coloradans have voted against anti-abortion ballot measures. Lucy Olena, Campaign Manager at No On 115 Campaign’s stated, “when we build a diverse movement and educate people about the complex realities of abortion later in pregnancy, voters unite to reject the bans.”
This is another example of how Colorado is a leader on reproductive health, rights and justice, but this win is not just a victory for Coloradans. Colorado has become a safe-haven for out-of-state families, many who travel from states, like Texas, due to abortion restrictions.

Louisianans have faced an onslaught of medically unnecessary abortion restrictions, with anti-abortion legislators passing over 89 abortion restrictions since the passage of Roe, well above any other state. Just a few months ago, the Supreme Court slapped down one of Louisiana’s anti-abortion laws, in June Medical Services v. Russo, but Louisiana lawmakers are still at it—no matter the consequences for Louisiana families and healthcare providers.
Anti-abortion Louisiana legislators got their wish, when voters approved Amendment 1. The Amendment adds language to the state constitution stating “to protect human life, a right to abortion and the funding of abortion shall not be found in the Louisiana Constitution.”  Despite this amendment, abortion is still legal in Louisiana. Michelle Erenberg, Executive Director of Lift Louisiana, a racially-diverse coalition of reproductive justice advocates, reflected in a statement after the result, “[a]nyone or any organization in Louisiana who fights for reproductive freedom knows that these are hard battles to win, but we keep fighting because women—not just those of means but all women and all people who can become pregnant—deserve the basic right of bodily autonomy and high-quality reproductive healthcare, which includes abortion.”
And Louisianans are not done fighting. In a statement released by the Louisiana Coalition for Reproductive Freedom, leaders of the campaign stated: “[d]espite the electoral victory for opponents of reproductive rights, this campaign has demonstrated that there is a strong, sizable group of Louisianans who oppose government restrictions, believe deeply in individual rights, and know that our state’s character is reflected in how we treat the vulnerable. We find solace and power in this and we will continue to fight day in and day out for reproductive freedom in the state legislature, city councils, the courts, the streets and anywhere where freedom is being denied.”

We are at a crossroads for abortion care. Anti-abortion politicians have denied our freedom and created obstacles when it comes to decisions about our health, our bodies, and our families. And now, the Supreme Court is poised to solidify its anti-abortion majority. Since 2010, anti-abortion state politicians have passed more than 450 abortion restrictions designed to push abortion out of reach, including outright bans, laws designed to shut down clinics, insurance bans. The measures brought to both state ballots reaffirm what we already know—abortion access is at stake .
But we can learn from Louisiana and Colorado activists how broad coalitions, centering people of color, LGBTQ+ individuals, and rural families, are possible and necessary to create lasting culture change around abortion access. Politicians and our courts don’t decide our destiny—we do. We are building power and forging a path forward for justice and liberation for everyone. We demand more from our leaders, our courts, and our health systems to ensure that people can get an abortion when they need it, wherever they live, and whoever they are.

While You Were Sleeping