Standing With Immigrant Women Workers on May Day

Today, May 1, is May Day, a day historically observed to promote and defend the rights of working people. Many working people and their allies will be rallying and marching today to demand critical policy changes to help them provide for their families while working with dignity: raising wages, improving workplace health and safety and working conditions, and gaining access to critical supports like paid leave and health care. But this year, millions of people across the country also are coming together on May 1 to support communities that have been targeted by the Trump Administration, including immigrants, Muslims, women, and the LGBTQ community.
Today’s action couldn’t come at a more crucial time. In the past 100 days, the Trump Administration has taken numerous steps to threaten women and families. Immigrant women are among the groups that have the most at stake in this Administration and are particularly vulnerable to racist and xenophobic policies that have targeted and demonized their communities based on their race or ethnic identity, immigration status, and religion. The Muslim and refugee travel bans, increased immigration enforcement and detention, plans to build a wall at the US-Mexico border, and actions jeopardizing access to critical health care (including reproductive health care) and public benefits, are tearing families apart and preventing immigrant women from being able to ensure the well-being and safety of their families. 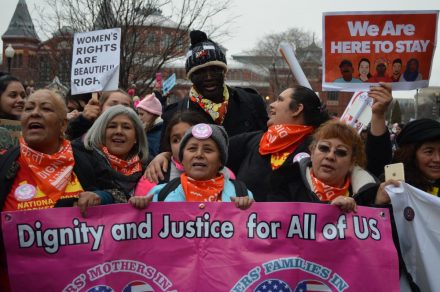 On top of all this, the Trump Administration has undermined workers’ rights that are critical for the economic security women and families, rolling back an Obama Administration executive order promoting fair pay and safe federal contractor workplaces, proposing a 21 percent budget cut for the Department of Labor, and appointing a Secretary of Labor who, at his confirmation hearing, failed to address the minimum wage, refused to commit to defend existing regulations increasing access to overtime pay and protecting workers’ health, and refused to commit to ensuring funding for agencies critical to ensuring women’s equality and protecting the rights of vulnerable workers. Also at risk are the executive order allowing employees of federal contractors to earn paid sick leave, and the EEOC’s collection of pay data from employers to help uncover pay discrimination.
So May 1 is the perfect time to highlight immigrant women’s particular interest in the fight to defend policies that support working people. Many undocumented women work in the informal economy. Immigrant women and native-born women’s labor force participation rates are similar, but immigrant women are disproportionately represented in jobs that pay low wages. One in five employed immigrant women work as a maid or housekeeper, nursing, psychiatric, or home health aide, registered nurse, cashier, or janitor or building cleaner – and many are supporting families on the wages from these jobs. Immigrant women are paid 67 cents to every dollar paid to native-born men and will lose $680,000 over a 40-year career because of the wage gap.
Immigrant women’s overrepresentation in low-wage jobs leaves them vulnerable to abuse by unscrupulous employers, including wage theft, unsafe working conditions, and discrimination, sexual harassment and violence. Lack of awareness about their workplace rights, coupled with fear of retaliation — including termination or deportation — means many immigrant workers are afraid to come forward to report or challenge unlawful practices and abuse. Immigrant women thus have a particular stake in comprehensive policy solutions that help all working people by raising wages, strengthening enforcement of labor and employment protections, and reforming our broken immigration system.
So this May Day, we stand in solidarity with and salute the women of color and immigrant women who are leading the resistance to hate and the fight to work with dignity. We hope you’ll join us and find an action near you, because we’re all in this together.