Girls across the country are being pushed out of school as a result of educational barriers including discriminatory discipline, harassment and sexual violence, and the failure to recognize and address trauma. In particular, after the 2016 presidential election, there was a marked increase across in incidents of harassment triggered by hate, with more than 40 percent occurring in elementary and secondary schools or colleges. Many girls face overlapping forms of discrimination on the basis of sex, race, national origin, disability, gender identity and/or sexual orientation. For example, the National Women’s Law Center’s 2017 Let Her Learn Survey of 1,003 girls ages 14-18 shows that being called a racial slur is a common experience shared by all girls of color, with one third to more than two in five of them saying they have had this experience (Asian and Pacific Islander girls reported the highest rates), compared to just over one eighth of white girls. The Let Her Learn Survey also reveals that more than 1 in 5 girls (21 percent) have been sexually assaulted, with LGBTQ girls reporting
even higher rates. Widening the lens, almost 1 in 3 girls (31 percent) reported experiencing either sexual assault or other violence.

These traumatic experiences not only affect girls’ mental and physical health, but also their ability to concentrate, feel safe, and stay and do well in school. And if girls do not graduate, they pay a high price. Compared to boys, girls who do not graduate from high school are more likely to be unemployed, to earn low wages if they have jobs, and to depend on public support programs to take care of themselves and their families. Yet despite the obstacles they face, girls are resilient and optimistic about their future, and many see themselves as leaders.

Let Her Learn: Stopping School Pushout is a series of reports that centers the experiences of the following groups of girls, examining the educational barriers they face and offering recommendations to address them: 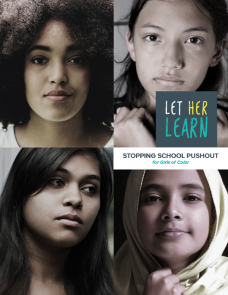 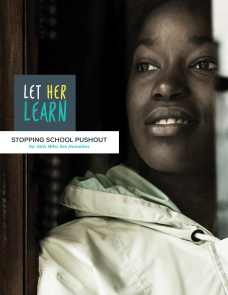 Stopping School Pushout for: Girls Who Have Suffered Harassment or Sexual Violence 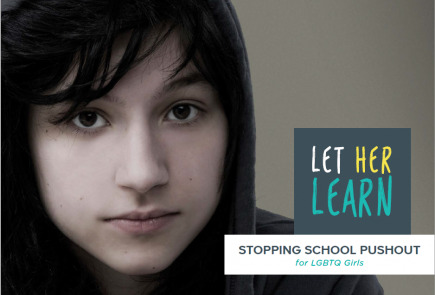