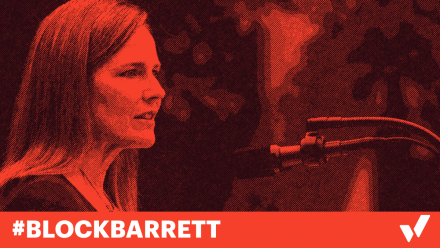 There is no question that Amy Coney Barrett would be a dangerous, “fundamentally cruel” addition to the Supreme Court. Her past decisions as a judge on the Seventh Circuit have already eviscerated protections for many vulnerable communities. If she is confirmed, she would have even more power to cause a lifetime of harm nationwide—including to student survivors of sexual assault.

In 2019, Barrett wrote an opinion that makes it easier for named harassers and rapists to sue their schools and harder for schools to hold students accountable for sexual misconduct.

John Doe, the plaintiff in Doe v. Purdue University, was suspended by his college and expelled from the Navy ROTC after his then-girlfriend reported that he had sexually assaulted her twice. Doe then sued Purdue, claiming that Purdue violated his due process and Title IX rights. For his Title IX claim, Doe argued that Purdue was motivated by anti-male bias—even though there was no evidence that Purdue disciplined him specifically because of his sex. The trial judge dismissed Doe’s claims, but when he appealed the decision to the Seventh Circuit, Barrett reversed and held he could move forward with his case.

Barrett’s decision to side with Doe is dangerous for at least two key reasons:

First, Barrett created a new Title IX standard that makes it easier for men who are disciplined for sexual misconduct to claim they are actually the victims of sex discrimination. Under Barrett’s standard, men punished for sexual assault could claim sex discrimination simply because there was a “plausible inference” that their schools were motivated by anti-male bias. Barrett indicated that the Department of Education’s 2011 Title IX guidance, which set out schools’ obligations to treat sexual harassment seriously, and the Department’s investigations of Purdue for Title IX compliance, suggested such anti-male bias. She reached this conclusion even though many of the unfair procedures that Doe alleged occurred in Purdue’s investigation were prohibited by the 2011 guidance, which was enforced by the Obama administration to also protect respondents’ Title IX rights.

In contrast to Barrett’s new “plausible inference” standard, sexual assault survivors are typically held to a much higher standard and required to allege facts showing that their schools treated them with “deliberate indifference”—that is, that their schools were clearly unreasonable in responding to the harassment they experienced—in order to bring a Title IX lawsuit. In effect, Barrett’s decision turns Title IX into a law that protects sexual harassers and rapists far more than their victims.

Second, Barrett’s decision could have devastating consequences for civil rights enforcement at large. In her view, the Department of Education’s efforts to protect survivors of sexual assault—both generally across the country and specifically at Purdue—supported Doe’s claim that Purdue had discriminated against him as a man. That logic is bewildering. It ignores the reality that people of all genders commit and are victims of sexual violence. Moreover, it disingenuously labels efforts to stop discrimination against victims of harm as suggestive of discrimination against perpetrators of harm. This reasoning could also undermine enforcement of other civil rights laws—for example, to allow cops fired for anti-Black racism to sue their police departments for so-called anti-white bias.

In addition to these troubling consequences, the facts in Doe v. Purdue are more complex than John Doe suggested in his complaint, as is often the situation in cases filed by named harassers. In a court filing from earlier this year, Purdue explained that its investigation revealed that Doe appeared to admit to and apologize to his ex-girlfriend for the sexual assaults. In response to her texting him “I literally can’t trust you if you don’t respect my boundaries,” he replied “[w]e already went over this several times. I can[‘]t even apologize any[]more because you get angry at me for it. . . . I[’]m sorry. I can[’]t change what I did, as much as [I] want to. I violated you and never should have.”

Lawsuits like Doe’s fuel the dangerous misconception that “false accusations” are common and obscure the reality that campus sexual assault is far too common and remains inadequately addressed.

Far too much is at stake to allow Barrett’s nomination to move forward. The Supreme Court is likely to hear cases in the coming months or years that will determine whether schools can take meaningful action to address and prevent sexual harassment. Students disciplined for sexual misconduct have already filed over 600 lawsuits against their schools, and as they become more and more emboldened by the Trump administration’s weakening of Title IX protections, some of these cases may reach the Supreme Court. Student victims have also requested the Court’s review in cases that would decide whether students must be harassed or assaulted again after they reach out to their school for help in order to file a Title IX lawsuit, and whether students who are expelled because they rejected their professor’s overtures have no recourse under Title IX.

We cannot allow the Trump administration to turn back the clock even further on Title IX. It would be an absolute disgrace to Justice Ruth Bader Ginsburg’s legacy to replace her with someone who would perversely misuse anti–sex discrimination laws and eviscerate their core purpose.